Searching for a sustainable future 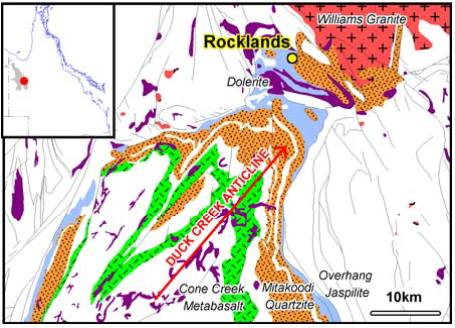 In April, 2006, Cudeco Directors Wayne McCrae and the late Tim Koitka made a major discovery of copper mineralization in their solely owned Rocklands tenement, 15 km west of Cloncurry. This discovery, by non geologists, of significant outcropping mineralisation in the “mature exploration terrain” of the Eastern Succession of the Proterozoic Mt Isa Inlier, north west Queensland challenges the current accepted wisdom that new discoveries will only be made using sophisticated technology under cover.

Since the Rocklands discovery, Cudeco have built up an extensive geological data set with surface mapping and an intensive drilling program which in March 2009 is in the order of 900 plus holes, 124000 metres of reverse circulation percussion and 18000 metres of diamond drill core. Other data sets include ground and airborne magnetics, radiometrics, SAM (Sub audio magnetics), IP, and soil and bedrock drilling geochemistry. This paper reports the current geological understanding of the Rocklands copper-cobalt-gold deposits.

Mineralization at Rocklands is hosted in a series of sub parallel, east south east trending, linear zones. The mineralised lodes occur within a metamorphosed sedimentary sequence of siltstone, sandstone/quartzite, quartz magnetite/jaspilite lenses, calcareous beds and calc silicates of Proterozoic age. The lower siliciclastic dominated sequence has been assigned to the Mitakoodi Quartzite with the jaspilite and enclosing units assigned to the Overhang Jaspilite. These stratigraphic units occur within the nose of the Duck Creek Anticline; a major fold structure which south of the project area has a cross-
limb width of 40km (Figure 1). The general attitude of the metasedimentary sequence is an east south east strike with shallow dip and younging to the north east.

Medium grained, intrusive dolerite of Proterozoic age is very prominent in the area. Although several styles of intrusive dolerite bodies may be present, the majority are steeply dipping, cross-cutting, linear and dyke-like. In general, mineralization follows the same structures as the dolerite dykes and cross cuts both dolerite and the intruded sedimentary sequence. Shallow surficial cover, of Recent or Tertiary age colluvium and alluvium, partially obscure some of the basement outcrop (Figure 2). In general, depth of weathering in unmineralised areas is a shallow 15 to 20 metres.

Observations made during logging of drill holes at Rocklands have led to the interpretation of an evolving sequence of paragenesis and breccia textures within the mineralised structures. Hydrothermal fluid was pumped into pre-existing structures which are typically occupied by dolerite dykes, and caused hydraulic fracturing of impermeable lithologies such as siltstone and dolerite wall rock. Continued fluid flow into the structure resulted in jigsaw type breccias, with little evidence of rotation, which were then replaced by milled matrix supported breccias with rounded clasts. The paragenetic
mineralogical sequence began with wall rock blocks mantled by secondary biotite, followed by infill of actinolite and magnetite, commonly in a typical “crackle” or jigsaw breccia. Continued hydrothermal development resulted in infill calcite, pyrite, chalcopyrite, magnetite and quartz. Some breccias are clearly polymict, clast supported with little matrix. There is a possibility that these polymict breccias have arisen from leaching of carbonate from the structure and subsequent collapse. Coarse unbrecciated sparry calcite appears to have been a late infill vein phase.

Alteration associated with the mineralization is a moderate to high temperature assemblage of biotite, actinolitic amphibole, red feldspar (probably both potassium feldspar and albite), magnetite, calcite, and quartz. Other minerals noted include minor garnet, fluorite and rare molybdenite.

Cobalt assays within the mineralized drill intersections are generally in the order of 500ppm to 1800 ppm, occasionally up to 0.5% Co. Although, visible primary silver-metallic cobalt sulphides (probably cobaltite) are present, particularly in brecciated siltstone, the bulk of the cobalt mineralization would appear to be associated with fine grained cobalt minerals with pyrite.  Gold grade of the primary mineralisation is generally in the 0.2g/t to 0.5 g/t Au range.

Oxidation of sulphidic mineralized structures at Las Minerale and Rocklands South/Double Oxide generated acid fluids which resulted in leaching, deep oxidation and supergene enrichment of copper. Surface outcrops over the main lodes are sparse and dominantly siliceous breccia. Oxide copper minerals cuprite and malachite occur as minor patches and fracture fillings at or just below the surface.

Within the oxidized zone, copper has been leached from near surface areas and re-deposited as coarse nuggets of
native copper. Copper carried in solution to below the base of oxidation, replaced existing chalcopyrite and pyrite with chalcocite. This leaching and reprecipitation is responsible for some of the spectacular high copper grades. Oxidation at Las Minerale has been observed at vertical depths in excess of 100m (Figure 4).

Coarse nuggets of native copper are particularly a ssociated with the oxidized versions of quartz rich breccia characterized by abundant supergene green clay. The close spatial relationship between polymict breccia, native copper development and base of oxidation further supports the surficial, carbonate-leach, collapse origin for the polymict breccia. Native copper occurs as fracture fillings often coating iron-rich rocks such as dolerite blocks and lumps of magnetite. Fluctuations in water table depth and oxidation levels have resulted in a complex relationship between native copper and
chalcocite. Zones of strong chalcocite development can occur well above the base of oxidation and often have undergone subsequent partial oxidation.

Cobalt assays within the oxide zone are similar to the primary grade i.e. in the range 500 ppm Co to 1800ppm Co. The nature of the oxide cobalt mineralogy is yet to be determined. High gold assays in the 1 g/t to greater than 10 g/t Au range have been returned from the oxide and supergene zones. This latter gold enrichment has not yet been studied in detail.

Surface geophysical methods have been effective in mapping out the mineralised structures at Rocklands. Strong magnetite development has helped close- spaced ground magnetics successfully delineate the lodes. The sulphidic nature of the mineralised structures means that they can be tracked with electrical geophysics. Conductivity trends produced from SAM (Sub Audio Magnetic) surveying proved particularly effective at an early stage in exploration in determining the attitude and trend of the mineralisation (Figure 5).

The associated primary mineral assemblage of magnetite, actinolite, and red felspar suggests possible iron oxide copper gold (IOCG) affinities. However petrological and ore-fluid studies are required before any concrete conclusions could be made about the genesis of the deposits. In comparison to other IOCG deposits in the region, the structural setting suggests copper mineralization at Rocklands occurs well into the late brittle stage of deformation.

The Cudeco Director’s role in the discovery and hands on guidance of the exploration program is gratefully acknowledged as is the permission of the Cudeco Board to deliver this paper. The assistance of the Rocklands Geological team, Terra Search’s support staff and GIS geologist Rob Lewis is gratefully appreciated. 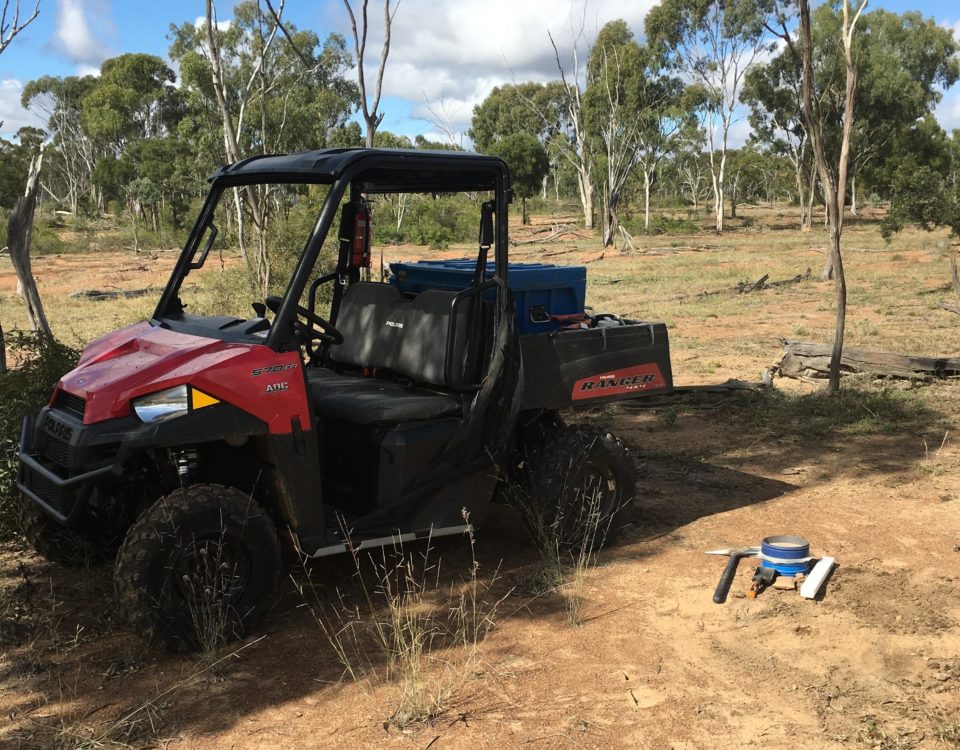 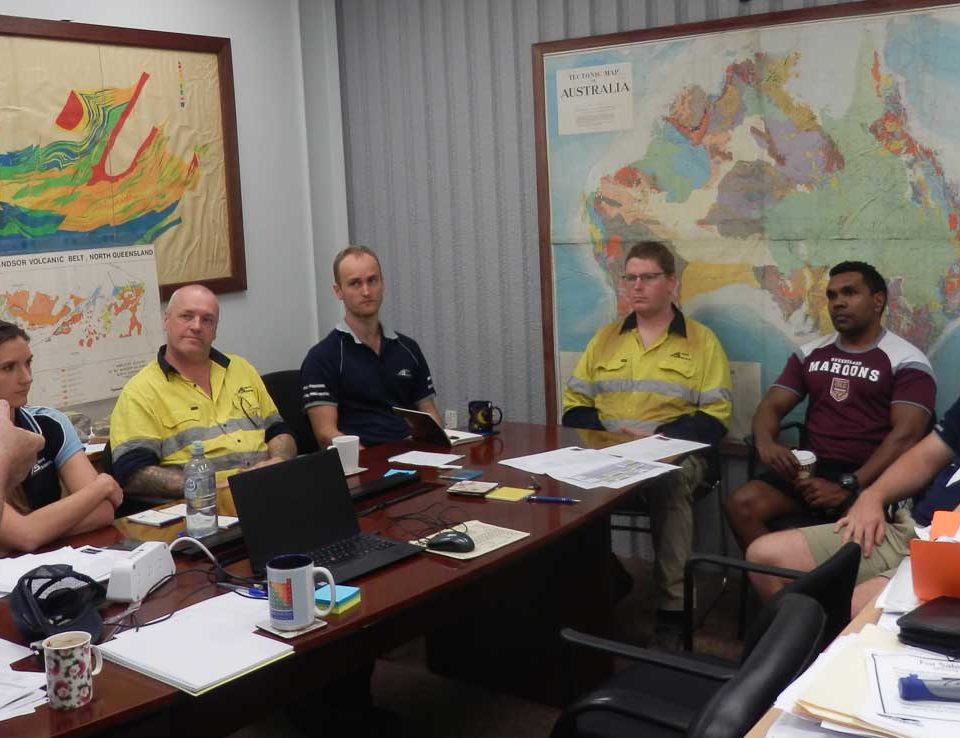