Recent Developments in the Management of Exploration Data from North Queensland

The Reward polymetallic sulphide deposit is at lat. 20°22’S and long. 146°l2’E, approximately 37 km south of Charters
Towers, and adjacent to the Highway deposit, on the Charters Towers (SF 55-2) l:250 000 scale map, Queensland. The deposit straddles the boundary between ML 1251 of North Queensland Resources NL and MLA 1506, which is being tested by a joint venture between City Resources Limited, Norgold Limited and North Queensland Resources NL.  Exploration drilling has identified three styles of mineralisation within the deposit. A single massive pyrite body, intersected in the discovery hole, is inferred to contain in excess of 5 Mt. Chalcopyrite lenses with minor gold occur within the massive pyrite. Overlying the primary ore, a zone of supergene enriched copper ore contains an indicated resource of 630 000 t at 6.8% copper (1.00/0 copper cutoff), and includes 287 000 t at 1.32 g/t gold (0.5 g/t gold cutoff). In addition, an inferred oxide resource of 309 000 t at 5.0 g/t gold (1.0 g/t gold cutoff) and 27 g/t silver overlies the supergene zone.

The Highway deposit was discovered in 1953 when Messrs J.E. Olsen and W.H. Thorne found gold in weathered material exposed in a road metal scraping. The accompanying white mineral, thought by the prospectors to be lead carbonate, was identified by the Government Geologist in Charters Towers as barite (J.G. Banks, unpublished report, 1953,T.H. Connah, unpublished report, 1954). Surface and underground evaluation of this deposit in 1954, by Mount Isa Mines Limited, failed to locate a body which could be worked profitably (Connah, 1960). Drilling by Noranda Exploration Company Ltd in 1964 and by Aberfoyle Exploration Pty Ltd in 1983 confirmed the presence of a small gold resource which was interpreted as being the weathered remains of a submarine pyritic exhalite and subsurface stringer zone (Kay, 1987). Further drilling by North Queensland Resources NL on the two small mining claims at Highway indicated a resource of 171 000 t averaging 4.4 g/t gold and 5.0 g/t silver (Russell, 1986).
Since 1972, several companies have carried out comprehensive regional exploration programmes over the central portion of the Mount Windsor volcanic belt. As the Highway to Handcuff area is located within one of the most significant structures in the Mount Windsor volcanic belt and coincides with large scale copper, lead and zinc soil anomalies and favourable host stratigraphy, Esso Australia Ltd (Essa) geologists recognised it as a prospective locus for volcanogenic massive sulphide style mineralisation. At Handcuff (Fig. 1), Esso intersected massive sulphide and baritic cherty sediment horizons in drill holes testing copper-lead-zinc soil anomalies in 1981 (M.J. Castle, unpublished data, 1982, 1983). An intensive drilling programme followed which included the drilling in 1983 of a series of 50 m and 25 In spaced vertical rotary air blast (RAB) holes on line 10 200 N adjacent to the Highway mining claims. Gossanous and malachite stained rhyolitic volcanics returned best values of 9 m at 0.43 g/t gold and 9 m at 0.76% copper (S.D. Beams, unpublished data, 1984). By 1983, Esso had established a drill-indicated resource of 1 Mt of 10% zinc at the Handcuff prospect.
In April 1986, North Queensland Resources NL farmed into the Mount Windsor Joint Venture (Esso and EZ Industries Ltd) on the ATP surrounding the mining claims over the Highway deposit. Holes H47 and H2 (Fig. 2), drilled by North Queensland Resources NL beneath the Esso RAB anomalies, intersected gossanous rhodolite and brecciated gossan, oxidised to a depth of 100 m, with values of4 m at 4.7 g/t gold and 5 m at 1.5 g/t gold.
This led the Mount Windsor Joint Venture, under the management of City Resources Limited, to site a deep hole HM 34 (Fig. 2) to test the H2-H47 nineralisation at depth. This hole encountered semi-massive sulphide between 123 and 137 m which assayed 5.95% zinc, 0.55 g/t gold and trace silver, massive pyrite was intersected between 151 and 250 m which assayed 0.77 g/t gold and included a copper zone between 200 and 230 m which assayed 3.5% copper and 0.72 g/t gold. Subsequently a time domain EM geophysical survey utilising a moving loop located a significant anomaly over the Reward massive sulphide body. The exploration history, geology and structural setting were further discussed by Beams, Laing and O’Neill (1989).

The Reward deposit is hosted within the Mount Windsor Volcanics, a felsic volcanic sequence in the Late Cambrian-Early Ordovician volcano-sedimentary Seventy Mile Range Group (Henderson, 1986, Murray, this publication). Features such as andesite pillow lavas, graded volcaniclastic units, extensive thin dacie lavas and interbedded epiclastic sediment indicate subaqueous deposition for the bulk of the group.
The Mount Windsor Volcanics are a complex suite of rhyolitic, rhyodacitic and andesitic lavas, fragmentals and volcaniclastics. The succession generally strikes east, younging to the south, and is characterised by low grade slate belt type deformation, of lower greenschist faces, with simple open folding about a weak subvertical slay cleavage, trending east. Structural complications occur locally, notably the prominent syncline NE of the Highway mine. A metamorphic aureole is developed adjacent to intrusions of the Ordovician to Devonian Lolworth-Ravenswood Batholith. Biotite-cordierite-andalusite assemblages are present within this aureole.
A significant number of volcanogenic base metal massive sulphide occurrences occur within the Mount Windsor Volcanics. These include the Thalanga and Liontown deposits and the Handcuff, Magpie and Warrawee prospects at Thalanga, 40 km west of Reward, the alteration assemblage, structural associations, ore petrology and host sequence show strong similarities to the Reward deposit (Gregory and Hartley, 1982, Gregory, Hartley and Wills, this publication). 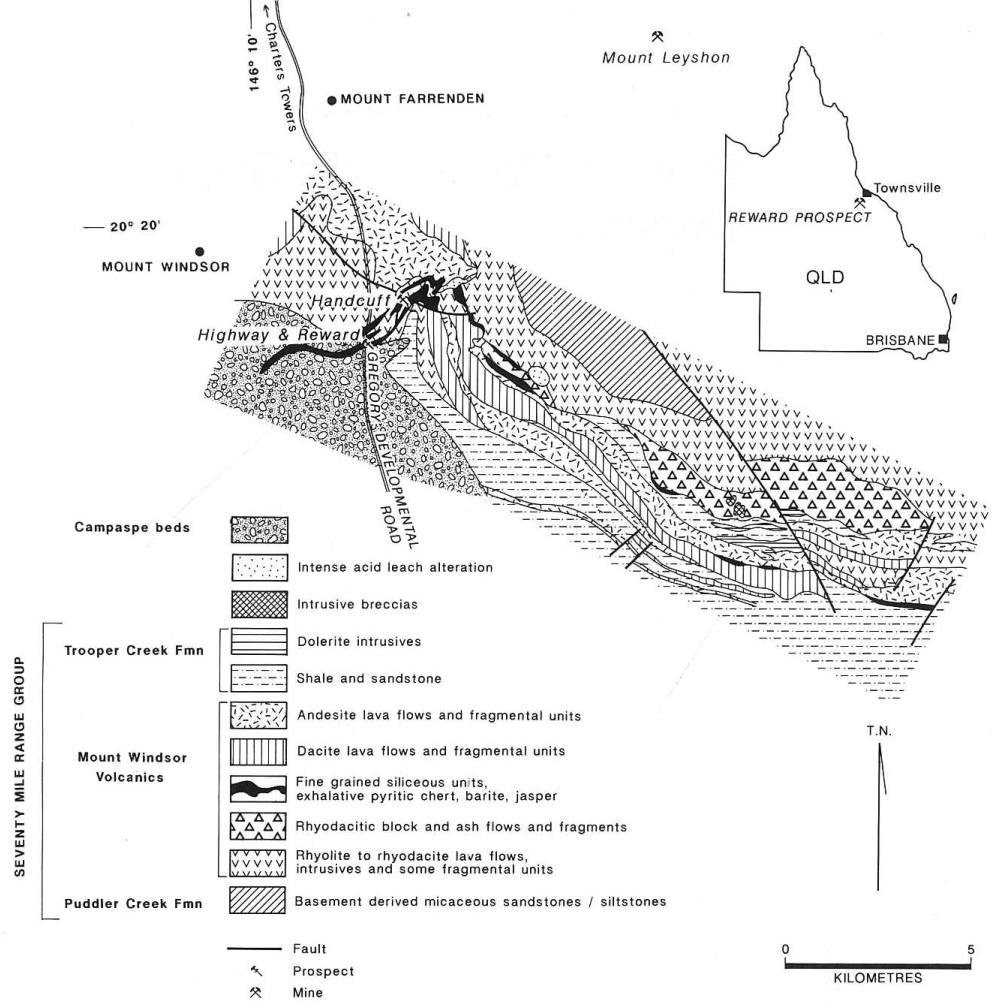 Felsic lavas and fragmentals of rhodolite to rhyodacite composition dominate the host sequence at Reward. In the unaltered lavas, phenocrysts of quartz and feldspar up to 3 mm diameter are scattered through a massive textured quarto-feldspathic groundmass. The individual rhyolitic units are 10 to 50 m thick and generally have fragmental bases and tops. R. Cas and J. Wright (personal communication, 1985) have interpreted similar rocks at Handcuff as being subaqueously deposited, quench-fragmented lavas (hyaloclastites).
Fine and coarse grained volcaniclastics are interlayered with the rhyolitic units. Bedding and grading are well developed, with individual graded units 0.5 to 2 in thick. Reverse grading has not been observed. The framework component of the coarse volcaniclastics consists of subangular to subrounded polymict clasts (up to 10 cm) of rhodolite and line grained siliceous material, together with broken crystals of quartz and feldspar. As the clast size decreases, quartz becomes the dominant framework component. The finest grained units consist almost entirely of a mosaic of cryptocrystalline silica and seriate, and no elastic component is evident. A chemical, sedimentary or exhalative origin is likely. These units often occur immediately adjacent to the massive pyrite.
Minor 1 to 2 m units of massive textured andesite to dacite lavas are interlayered with the felsic volcanics and volcaniclastics. Rare 1 to 2 m wide dykes of andesite cut the succession.
At Handcuff, 1.5 km NE of Reward, the mineralisation is hosted in a complex assemblage of exhalative chert, vitric tuff and chlorite-carbonate exhalite and overlain by coarse dacite/rhyodacite fragmental and debris flows.
In the Reward area, the volcanic sequence is completely oxidised to vertical depths in excess of 100 m. This contrasts with the Handcuff area where the depth of oxidation is approximately 10 to 20 m. Acid ground waters generated by the large massive pyrite body, together with the current exposure level being close to the deeply weathered pre-Tertiary land surface, could be responsible for the very deep level of oxidation.
A cover sequence of coarse boulder conglomerate, ferruginous clay rich grit and silt lap on to the southeastern side of the deposit (Fig. 2). The cover rocks have been ascribed to the Tertiary Campaspe beds (Wyatt et al., 1971).

The Reward deposit occurs within a typical slate belt deformational regime (W.P. Laing, unpublished data, 1987). The dominant structural elements are a strong slaty cleavage, defined by muscovite and chlorite, and a moderate to locally strong mineral elongation lineation lying within the cleavage, defined by quartz-muscovite-chlorite generally and locally by elongate fine pyrite blebs (1 to 5 mm diameter).
The cleavage strikes 050° and dips steeply, generally to the SE. The mineral elongation is essentially vertical, and bedding is clearly observable only in the volcaniclastics. The deposit lies within the western limb of the Highway syncline which becomes masked by Tertiary Campaspe beds to the south and west. Flat dips occur within the volcaniclastic units above the body of massive pyrite. Late veins of fibrous quartz and gypsum are developed sub horizontally at right angles to the cleavage. Zones of quartz veining and cavities, indicative of faulting, have been intersected by drilling. The extent and controls that faulting may have on localisation of ore have not yet been established.
Beams, Laing and O’Neill (1989) proposed a syndeformational origin for the massive sulphide pipe.

Fresh unaltered rocks are rare at Reward. Feldspar destructive alteration is generally present, producing mineral assemblages dominated by sericite and quartz. Quartz phenocrysts are preserved in almost all cases, so an original rhyolitic lithology is inferred for the bulk of the volcanic sequence. Fine felly seriate replaces original feldspar and mafic mineral phenocrysts, together with much of the groundmass. Introduced fine grained quartz occurs as vein material and masses within the matrix of the rocks. A 50 m wide zone of intense chlorite-anhydrite alteration occurs immediately beneath the massive pyrite body on line 10 100 N. This zone consists of5 mm porphyroblasts of lilac coloured anhydrite mantled by white gypsum, and studded through a schistose matrix of dark greenish black chlorite with possible associated talc. This zone may constitute a feeder pipe for the massive pyrite mineralisation. An intense clay alteration zone is developed within l to 3 m of the massive pyrite body. Here the rocks are completely converted to white, probably kaolinitic, clay with minor quartz.

Assay intersections typical of the diHlerent styles of mineralisation at Reward are given in Table l . A thick body of massive pyrite i chalcopyrite occurs within the rhyolitic sequence. The body is saddle shaped in plan with a bulbous top and prominent stringers (Figs 2, 3), and is oriented along grid north centred on the I I 000 E base line. Chalcopyrite lenses in the massive pyrite resemble the ‘yellow ore’ of Kuroko type mineralisation (N.J.W. Croxford, unpublished data, 1988).
Banding within the massive pyrite occurs at the upper contact, while elsewhere a massive texture is present. Brecciationis common, with angular pyrite class (0.5 to 10 cm) framework supported in a fine grained pyritic matrix. Overall the body contains more than 95% sulphide, mostly pyrite, but with some zones in which chalcopyrite can reach 20%.
The grain size of the pyrite ranges from fine (0.1 to 0.5 mm) to coarsely granular (1 to 3 mm). Chalcopyrite is present as interstitial blebs which are rarely coarse, but are commonly very finely intermixed with pyrite. Chlorite, sericite, quartz, gypsum and possible barite are rare gangue minerals.
Immediately below the base of complete oxidation is a supergene zone (Fig. 3) in which volcaniclastic and rhodolite units above the massive pyrite are partially to almost completely replaced by sooty black chalcocite. Copper grades up to 40% are present over some l m intervals, indicating almost massive development of chalcocite. The chalcocite rich supergene zone is occasionally developed directly over the top of massive pyrite-chalcopyrite.
A gold rich zone is occasionally developed above the base of oxidation. It consists of fine grained siliceous breccias and orange coloured baritic gossan. Much of the silica was probably introduced during downward percolation and leaching by ground water.
Lead-zinc mineralisation is physically separate from the massive pyrite zone. Massive banded purplish sphalerite, galena, pyrite, chalcopyrite and barite occur within lenses which are closely associated with overlying volcaniclastic units. High gold values, rarely manifested as visible specks of native gold, are associated with high levels of sphalerite and barite.
Click here to download the full PDF of this publication.